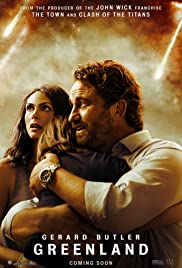 Just give us a call if you find out anything when you arrive.
For example, where we can go to safety.

Nothing like a decent disaster movie every now and then. A film that can satisfy the disaster tourist in you. The number of such films that have already been made is innumerable. The causes of global destruction are manifold. There were devastating earthquakes (“earthquake“And recently” San Andreas “), which raised plateaus and tore apart entire metropolises. Boats that have sunk because of a big wave (“The Poseidon Adventure“) Or a stray lump of ice (“Titanic”). Erupting volcanoes (“Dante’s summit“), Against oncoming ice ages (“Day after tomorrow“), Tsunamis (” Lo Imposible “) or (and at the moment more appropriate) a rapidly spreading, deadly virus (“infection”). The plot of such disaster films is generally the same. First, you already know what is going to happen and are patiently waiting for the catastrophic moment. Next, experience the effects of the announced disaster. And secretly you feel that blissful moment in which you realize that you are only a silent witness and not physically present. And each time it ends well for the protagonists (with some random sacrifices). You miraculously manage to escape death. Such films usually end with apocalyptic images that show how devastating it all was.

In my opinion, “Greenland“Fell outside the category of films that follow such a plot. It fits more into the list of films where you also find “I’m looking for a friend for the end of the world”. You know what drama is going to take place. But it’s not really going to be spectacular. The action-packed scenes in which fragments of the approaching comet hit the earth are rather rare. A bit like in “Armageddon“Where topics such as almost impossible human missions and self-sacrifice were more central than the disaster area itself. In the latter, the spatial journey with a space shuttle was brought to the fore. In the “Greenland“It is the Garrity family’s journey to a certain place where John (Gerard Buttler) and his family are safe from the impending destruction of all living things on earth. In short, the impending disaster fades into the background and the drama takes over. Granted, in many ways.

As befits a clichéd disaster movie, you have the family aspect first. Usually it is a family with relationship problems. This is also here in “Greenland”. What John actually did is not specifically stated. But rest assured, the longer the arduous journey, the closer the suspicious spouses grow together. I think that is also a mandatory point that must be included in a disaster film. The film focuses more on the side effects of such a catastrophe taking place all over the world. The hysteria and panic that arises. The looting and the massive exodus with the well-known monster traffic jams. The indignation of the friends of John and Allison (Morena Baccarin) who attended a birthday party after John received a personal message from authorities to keep himself and his family safe in a secret location. A parent’s request to bring their child to safety had more of an impact on me than the rest of the film.

Realistic and yet a little unrealistic.

The rest of the film shows the arduous journey to this secret place full of obstacles and adversity. Of course the son Nathan (Roger Dale Floyd) suffers from diabetes and the essential medicines should not be forgotten. And yes, you can expect problems related to this drug. So that it gets on your nerves. Getting to the military airport to claim their reserved seats on a transport plane is also not without problems. And at some point everything becomes a little too much. If you think this family has faced enough setbacks, this is what shows up. And although the makers tried to give this film an extremely realistic character, it also contains some unrealistic situations, such as the chaos at the airport. I fear that if we are faced with such a situation, a large number of citizens would in fact face the barriers of control. And the way things are resolved in these turbulent times also seems a little bit incredible at times and too good to be true.

Perhaps my expectations for this film were a little too high and it turned out to be a pretty disappointing experience. You took an emotional roller coaster ride rather than a disaster film “Avant la lettre”. But turn off your brain and it will be very enjoyable. And although Gerard Butler is usually associated with pointless action films, he knows how to convince in this film. Just like in “The Vanishing”. The very likeable family man who, thanks to heroism, manages to restore the broken trust. “Greenland“It’s certainly not a bad film, despite the lack of action-packed and apocalyptic images. I found “2012“Much worse, though”GreenlandFeels pretty melodramatic at times. But this film is not boring. Before you know it, the 2 hour film is ready. Unfortunately, this disaster movie wasn’t unpredictable compared to the oncoming comet.

Overview of the coming year

33 of the best hairstyles for wedding guests to recreate