Holt Bogg’s carefully crafted and expertly executed short film Crazy is a perfect example of everything that is great about short films.

An insecure mob boss asks an eccentric killer for help to take out his girlfriend’s lover, who he believes is a significantly larger penis. The only problem is that it is almost 4:00 PM.

Holt Boggs wrote, directed, starred, edited and produced this short film. So it’s safe to say that he was heavily invested in him. Boggs managed to produce a superbly played and expertly timed short film that draws audiences and holds them on until the end. What starts out as an intense thriller magically evolves into a dark comedy. Once the short film is done, I can’t help but feel a sense of sadness for the characters. Boggs really did something special here and deserves a lot of credit for it. The writing is fantastic, the story as a whole works so well, and the actors are doing a performance worthy of the script.

Holt Boggs and Brian Villalobos both showed excellent performances. Villalobas play the cool and confident hitman and Boggs the tightly wounded mob boss. Dialogue flows fast and gets more absurd the further we get into this short film, but Boggs and Villalobos both continue their serious, quick delivery that brilliantly increases the tension and transitions flawlessly into comedy territory. The pair seem to turn the intensity levels up and down with ease. This dynamic duo complement each other, Villalobos steals the show during diner moments and Boggs really shines as soon as we get our big reveal.

Most of Crazy takes place in a diner, a classic place for this establishment. A mob boss and hitman meeting at a diner to discuss a business aren’t original, but it’s a classic for a reason, and the instant familiarity means Boggs doesn’t waste time on his brief explanation must be the situation. A simple camera setup with different shots is all that is required for us to capture the action.

Crazy has a great soundtrack that sets the scene. Not only does it help kick-start the drama and tension, but it also knows when to stay and when to fade and bubble to the surface at the right moment. The final title of the credits “I Feel You” by Missio leaves a lasting impression on the audience. 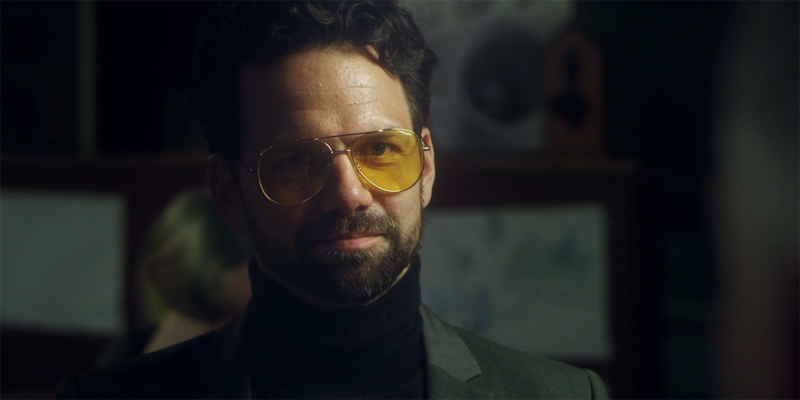 Holt Boggs plays Stanley. Boggs really brings a high level of intensity to his performance as he rattles off the high octane dialogue trading lines with Villalobos. Boggs’ performance reaches a new level as soon as the short film switches to a dark comedy. He seems to excel in this role.

Brian Villalobos plays Monty. I really liked the trust Villalobos had in Monty. He really made it through the diner scene. It was a pleasure to watch his verbal exchange with Boggs. He carried himself with all the bragging rights the character needed.

Keturah Branch plays Nancy Wallace. It wouldn’t be right if I didn’t mention Branch, who has a very subtle look at the beginning of the short film that you can quickly wipe off without realizing how important her words are to the overall plot of the short film. She has an excellent twist that gives her role a definitive edge as she keeps her co-stars tightly in check. A good performance.

Holt Boggs Crazy is a great example of everything that is great about short films. Two standout performances, one great story, and enough twists and turns to guess you are all the ingredients you need to turn this movie into a five star movie.

You can see the trailer HERE.

Astrology forecast and election for December 2017

Jorge Masvidal’s last chance for the title? Would heavyweights keep up with Conor McGregor’s enthusiasm?

Prosecutors in the Derek Chauvin Trial to rest their case