Albie Manzo is preparing to cover all of his family drama in an upcoming episode of his podcast. Dear Albie.

In the midst of his mother Caroline Manzois ongoing feud with her sister and former Real New Jersey housewives Co-star, Dina Manzo, Albie went to his Instagram page where he confirmed he has reached his limit when Dina clapped back accusing him of using her for profit.

“Oh, and very quickly, before someone gets upset that someone [with] the last name Manzo posted something so this is your clown – the chance to leave unsubstantiated comments as if you think you “know” something. I was not silent, I was busy. But I’m just fed up with this Bulls-t and you’ll be hearing from me soon, don’t worry, “warned Albie via a screenshot shared by Love Andy C on Twitter as he announced his upcoming show.

“In the meantime… Mama Bear, you are the strongest woman I know. I love and admire you more than you will ever understand, ”he added. 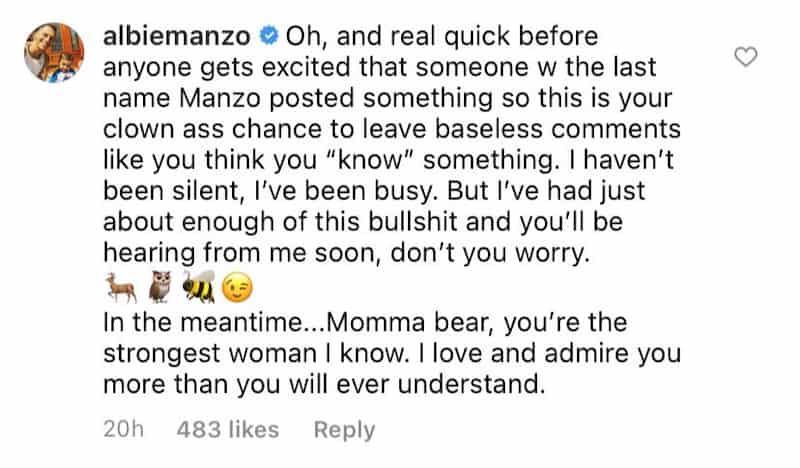 After Dina saw what Albie said, she responded to his comment by accusing him of not only using it for a storyline on his podcast, but also of using her family feud to gain listeners and thus money for his show .

“Ohhh shocking … I’ll be talking about it on his podcast for the downloads,” Dina replied. “Unfortunately, this will only be a ‘storyline’ to benefit from. Pity.”

Things got tense between Dina and Caroline earlier this month after it was revealed that Caroline had served as a character witness for her brother-in-law. Tommy Manzoafter he was accused of assaulting Dina, his former wife and her current husband, Dave Cantinafter breaking into their New Jersey duplex with another man in 2017. He was also charged with hiring a member of a known criminal family to attack Dave in a mall in 2015.

After Caroline and others wrote letters on behalf of Tommy, he was released from prison.